My first energy experience happened early one morning in March 2008, I woke up one morning in absolute fright, kicking the bedding of bed, I felt as if I had holes in my hands and something was pouring out of the palms.  My first though was blood, it was invisible and so tangle, it was pouring from the centre of both my palms.  I tried putting my palms together and my hands wouldn’t touch, it actually felt like I had an invisible balloon between my hands, the more i tried to bring them together the greater I would feel them pushing apart.

I then realised it was energy and I started playing with it, it was as if I had an invisible ray, I would light an incense stick and I would use the energy to to bend and play with the smoke.  I only realised a few months later that I had an experienced an Initiation that night. 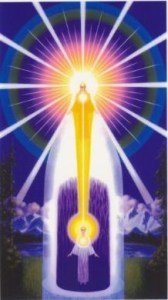 First Healing Experience
The following day, my maid came home, she had hurt her knee and it was extremely swollen, she was using crutches as she could not put pressure on that leg.  Intuitively I felt that I could assist her, I asked her to lie down on my meditation rug.  I kept my hand about 15cm directly above her knee and I started moving my hands horizontally about 10cm just above and below the knee.

As I started this process I could feel the energy flow, with each movement above and below the knee, i could feel the resistance and the blockage of flow in the knee within myself, it felt like something grinding every time I moved my hands above her knee.  She started crying and I asked her what was wrong.  She told me that she could feel something moving from above to below the knee and back again every time I moved my hands back and forth.  After about 5 minutes, the grinding sensation and feeling stopped, and I knew at that moment it was complete.

She contacted me the next day, telling me that her leg was back to normal.  This was one of the experiences that brought magic back into my life.

About the Author: Aang

Teacher, Mentor & Energy Healer to assist individuals experiencing a spiritual awakening and those who wish to break any barriers that may be preventing them from moving forward.