A subtle feeling like very delicately vibrating air, which streams and pours into your body from the world around through your eyes, ears and your whole skin. You suck it into yourself. 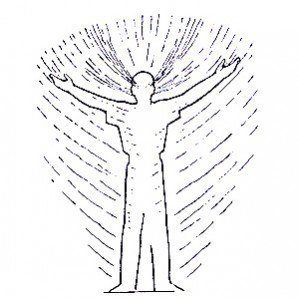 You have the feeling that you can perceive in other ways than through the physical sense organs. Love as activity.

The Fifth Position of ‘I think speech’

‘I feel myself within myself’

The words
You now feel a connection between the spiritual self and the earthly self. Life has now opened from birth to death and has included another dimension as it has opened up to spirit. There are are now possibilities of reality that are beyond the borders of previous experience; now acting in ways that are harmonious with the future, rather than it being determined by the past.

The first ‘myself‘ refers to the spirit, the second to the earthly self. 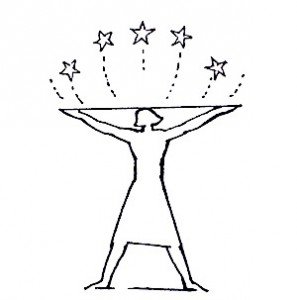 The position
Hands and legs come close once more to the body now leaning slightly forward. The hands are to the level of the top of the head. That which is endless touches the infinite realm, opening a path towards the future for the impulses of will (creation).

The fifth exercise helps us overcome Ahriman (cleansing the etheric body of the illusion of time). It frees the etheric body from dependency on senses impressions and being absorbed in the ongoing rush of time. The veil of materialistic illusion created by the Ahriman is brushed aside. We can become free of the past’s influence as the single determining factor of our life.

Ahriman works in the etheric, living realm of the outer world. Ahriman is the bearer of the power of death and dying, and oversees the flow of chronological time, of ‘Chronos’.

Through the fifth exercise we open ourselves up to the world of spirit, brushing aside the veil of time which the Ahriman have woven. To the awareness of truth attained by the fourth exercise is now added the experience of beauty..

There are three supersensible, spiritual forces or beings, called in anthroposophy Lucifer, Ahriman and the Asuras (Asura in singular). These beings affect the evolution of the various bodies of the human being:

These beings have received the task of opposing the human being, in order that they may develop and evolve. It is essential to understand how these beings effect us. The human body is the physical expression of our thinking ego-being; and thinking on the physical level is the foundation of human nature. The Asuras specifically attack this thinking, where we find thoughts arising in us of a lower, sensual, emotional, self-involved kind.

We have to raise our thought forms setting a higher, new, living thinking, so that the Asuras begin to ‘starve’, and we will be able to overcome their influence. So exercising positivity creates the counterbalance of the negative and its effects which Lucifer has woven into our astral body.  In fully keeping with this positivity, we stop seeing these beings as adversaries or enemies, rather seeing them as giving us the opportunity in developing ourselves, our own particular powers and capabilities. We see them as trainers and begin to see them as being an enormous help to human beings.

The three ‘trainers’, Lucifer, Ahriman and the Asuras, are the chief providers of the opposition (negativity) which human beings need to develop and transform their three bodies (physical, etheric and astral). There are, however, three, far mightier beings who counteract them, who act as guides and helpers of humanity, ensuring thatLucifer, Ahriman and the Asuras remain within the bounds of their task. These powerful beings (The Hierarchies) belong to the highest being-levels of the universe, and protect the human beings’ three bodies:

They cleanse the etheric body of the illusion of time.

The Cherubim oversee life of the universe, the harmonious confluence of all the parts and processes of the world. The also supervise Ahriman’s activity in the human etheric body. It is Chronos or chronological time which draws us down out of the world of harmony, out of eternity.
[/stbpro]