Developing our Ability to take Action

[stbpro id=”download” caption=”1. The Exercise” image=”null” collapsing=”true” collapsed=”true”] Every day at a certain time, command yourself to carry out an action which had not particular point of purpose for our daily activities.

This exercise can strengthen the will and help to overcome dissatisfaction and restlessness. But one can only achieve what lies within one’s capacities. Stability and inner fulfilment are dependent on striving to attain only what is within the bounds of possibility.

Precondition: Having a the time (like a watch or mobile) with you.

Each day, before breakfast, I will give myself the commands for the day ahead- that is, I will choose certain actions and times when they are to be performed.

Three to five actions per day. More is unrealistic, at least to begin with, because of necessary repetitions by missing the right moment.

If the right moment is missed, then you should immediately, on the spot, choose a new time when the action will be repeated. It is advisable to avoid similar times, i.e. if you missed carrying out an action at 11h30, it is better not to choose 12h30 or 14h30, but 12h53 or 14h44.

The outer aim is to gain mastery that you can set your watch by your own developed sense of time, and be correct to the minute.

A feeling of initiative and energy, like a stream of rushing water passes from head down over the forehead to the heart, and flowing into the whole upper portion of the body.

One will notice a feeling arising from doing this exercise, which is something like: ‘I’m capable of something’, ‘I’m more capable that I used to be’, and ‘I feel an urge to be active. One actually feels this in the whole upper part of the body. One should then try to allow this feeling to flow down to the heart. 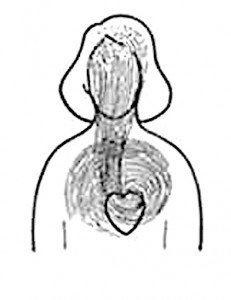 Once more one becomes aware of a certain feeling, a steadiness and an urge to be active. One should raise this feeling into consciousness, then pour it like water from head down to the heart to embody it more fully.

Once again, the awareness of this feeling, should follow immediately after carrying out the exercise.

By bringing this exercise to a certain degree of perfection, one frees oneself more and more from the tyranny of time, thereby creating time in the process.  One learns to mastery over one’s own will impulses, thus taking control of the activity of the etheric body, which is one’s own time-body. The capacity for willing takes root in a new foundation, and is no longer sucked continually into the onward rush of time.

There is in fact a difference between this ever onward, ongoing flow of chronological time, to which we are subject, and the kind of time which is ‘right’ for our destiny.

The ancient Greeks had two terms for ‘time’: the one, which was measurable, physical, chronological time they called chronos, and the other, the immeasurable, qualitative, right time which they called kairos. (The time connected in Gospels with the life and deeds of Christ is always kairos, and is therefor not subject to the laws of physical time.) We can all experience the elasticity of time, the way it often does not seem to correspond to measurable clock-time. Sometimes is contracts to an unbelievably short instant and sometimes it stretches out unbearably.

The real aim of the exercise, then, is to overcome the hold that time has on us and to find for oneself the kairos of one’s own destiny, the ‘right’ moment. Once this aim has been attained, one becomes able to create the time for oneself. Then one no longer needs to say, ‘I don’t have time,’ but, ‘I have time because I will it (I create it).