Developing our Ability to Balance our Feelings

[stbpro id=”download” caption=”1. The Exercise” image=”null” collapsing=”true” collapsed=”true”] Learning to master the expression of your own feelings so completely that only those are expressed outwardly which you yourself determine, or none at all.

To develop a rich feeling life, without however being compelled to any involuntary show of emotion – feeling without compulsively expressing it.

It can be helpful to imagine the different feelings in terms of colour and form, and also to try to draw or paint them. This helps to grasp them in a much more concrete kind of way, and to influence them more easily.

First strive to become quite familiar with your own feelings, particularly the way these are expressed in your face. For this purpose, find a peaceful period, at least 15 minutes each day, and dwell as thoroughly as possible upon the usual expressions of your feeling-life. Only then should you begin with the exercise proper.

It will often be too difficult to immediately trace all your feeling impulses and the way they are expressed; so you can just practice the exercise for a while with what you have discovered, and then extend it to explore further kinds of feeling and their outward form.

During a quite period of at least 15 minutes, choose a few expressions of emotion, ones that you know belong to your daily ‘repertoire’, and undertake to change these during the next day: to moderate them if they are too overbearing; to bring them more strongly to expression if they are too weak or do not appear at all on your face or ‘body language’. The idea is to arrive at a balanced, middle level of expression. Once you have mastered these manifestations of emotion to a great enough extent, you can decide to prevent them finding expression at all.

In a second step, you can try, during the next day, to put into effect what you have undertaken to do, that is change the modes of expression of various feelings, though not the feelings themselves.

The third step involves first reviewing, in the daily quite period what you have practiced, and then in the light of the review deciding on the course your practice should take the following day.

So you structure this exercise in such a way that the first and third parts of it take place in the daily quite period – the first part on one day, the second on the following – while the second part is practiced throughout the whole day.

Above all, if subtle attentiveness is maintained, an inner tranquillity in the body will one day become more noticeable; as in the two previous exercises, we pour this feeling into the body, letting it stream from the heart towards the hands, the feet and finally the head.

Once every day, at least, this inner tranquillity should be called upon and then the exercise of pouring it out from the heart should proceed. 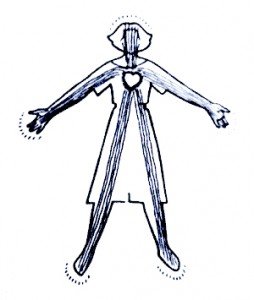 This gives a feeling of peace, which one allows to stream out from the heart through the arms and the hands. This radiates out from the hands into ones deeds. Then one lets it stream down to the feet, and lastly to the head.

This peaceful composure makes itself felt as an inner warmth. As you concentrate on the heart, it radiates from there into the hands, then the feet and then into the head. This experience of the etheric stream can conclude your daily quiet time exercise.

The aim of this exercise is to develop a rich, fluid, unhampered feeling life, and at the same time to become master of its heights and depths – in other words you learn to occupy the middle ground in which expressions of sympathy and antipathy balance each other, and in whose free space your feeling life can live most intensely. For you can only have a broad, harmonious register of feelings when they are not limited by a lack of expressive possibilities.