[stbpro id=”download” caption=”1. The Exercise” image=”null” collapsing=”true” collapsed=”true”] To practice positivity, which is to find the positive of everything that happens to you and with anything that you encounter.

In Persian poetry there is a beautiful legend about Christ, which illustrates the meaning of this quality. A dead dog is lying on the road. Among the passersby is Christ. All the others turn away from the ugly sight; only Christ pauses and speaks admiringly of the animal’s beautiful teeth. It is possible to look at things in this way, and he who earnestly seeks for it may find in all things, even the most repulsive, something worthy of acknowledgment. The fruitfulness in things is not in what is lacking in them, but in what they have.

A feeling of being blessed and great joy, as though you are expanding. This is concentrated in the heart, then radiating through the eyes into your surroundings; then through the ears and the whole surface of the skin. You will experience yourself as the outspread etheric body – love as an active force of feeling. 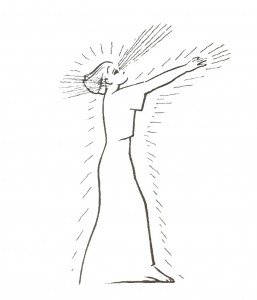 You should let this out-streaming occur each time that you have carried out the exercise, or at least on some occasions. I understand in this day and age it is not possible to carry out this exercise just anywhere, I recommend that you do it in the morning as a practice and then apply it if possible after the exercises.

The fourth exercise helps us overcome the oppositional force of Lucifer (negativity in the astral body). It frees the astral body from Lucifer’s negativity (primal lie and illusion), it perfects the capacity for thinking and feeling, and strengthens the soul in its effort to gain control and sovereignty of itself. Our feelings are freed.

There are three supersensible, spiritual forces or beings, called in anthroposophy Lucifer, Ahriman and the Asuras (Asura in singular). These beings affect the evolution of the various bodies of the human being:

These beings have received the task of opposing the human being, in order that they may develop and evolve. It is essential to understand how these beings effect us. The human body is the physical expression of our thinking ego-being; and thinking on the physical level is the foundation of human nature. The Asuras specifically attack this thinking, where we find thoughts arising in us of a lower, sensual, emotional, self-involved kind.

We have to raise our thought forms setting a higher, new, living thinking, so that the Asuras begin to ‘starve’, and we will be able to overcome their influence. So exercising positivity creates the counterbalance of the negative and its effects which Lucifer has woven into our astral body.  In fully keeping with this positivity, we stop seeing these beings as adversaries or enemies, rather seeing them as giving us the opportunity in developing ourselves, our own particular powers and capabilities. We see them as trainers and begin to see them as being an enormous help to human beings.

The three ‘trainers’, Lucifer, Ahriman and the Asuras, are the chief providers of the opposition (negativity) which human beings need to develop and transform their three bodies (physical, etheric and astral). There are, however, three, far mightier beings who counteract them, who act as guides and helpers of humanity, ensuring thatLucifer, Ahriman and the Asuras remain within the bounds of their task. These powerful beings (The Hierarchies) belong to the highest being-levels of the universe, and protect the human beings’ three bodies:

They cleanse the body the astral body of the Original Sin*, restoring the original nature of our will.

By working through the fourth exercise, we begin to transform the damaged astral body and the Thrones simultaneously enhance in us the power of will. The fourth exercise enables the astral body to gradually free itself from and be cleansed of the negative / bad will, so that ‘good will’ can reinstated instead .

Notes: * The astral body was bound to the sense world through the ‘temptation’ of Lucifer and we are dependent on this world in our feelings. This is the astral body aspect of the ‘Original Sin‘.