“If your compassion does not include yourself, it is incomplete.” – Buddha

Connecting with Your Higher Self

In our final week we will be exploring what equilibrium means to us and how to become more present in every day living. As we develop becoming more present, our awareness expands and we are able to see and cognise on a much greater level. The topics for this session are:

This symbol represents the perfection of duality or polarity as one. On of the most common ancient infinity symbols is a snake biting or eating its own tail representing that there cannot be a beginning without an end and neither can there be an end without a beginning.

In mathematics the term infinity is used to describe something that is unimaginable, forever expanding, something that the mind in unable to conceive. In essence meaning that time and space has no end and a destination cannot be reached.

The loops reflect the balancing mechanism to find the balance of the centre point which is known as equilibrium. This is the point of oneness, the point of wholeness. On either end are reflections of each other, we know it as opposites or polarities: 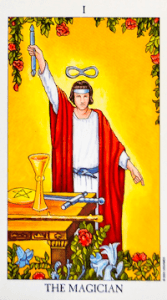 The Magician card in Tarot is represented with an Infinity symbol floating above his head symbolising eternity. In tarot this is one of the most favoured cards representing magic, manifestation and cultivation of desires and experiences.

Infinity represents the equilibrium or the balance of the various forces in magic. The Magician is associated with skill, logic and intellect, the bringing together of these elements in creating a bridge between the world of spirit and the world of physical reality.

These polarities cannot exist without each other, making everything eternal. Rather than forcing something away from us, rejecting it, we have to now learn to accept or embrace that aspect of us.

The infinity symbol shows us that we have to find the balance and the equilibrium within us, opening our experiences to greater depths and understandings on how we perceive our reality.


One of the greatest keys in learning to understand our reality is to learn how to be present. Our current society has been built on structures of expectations and future ideas. This has a direct impact on how we perceive reality, all our beliefs become channelled and focused in the energy of continuously searching. We become extremely distracted and tend to forget about ourselves as we concentrate on everything outside us.

We get caught up in day to day living, all of our responsibilities and time seems to disappear. The needs of everyone else is met before yours, the day completes and the cycle begins the next day. If this feels familiar or you can relate to these patterns then its time to start making different choices. Our choices dictate our behaviour and our patterns, if we keep making the same choices, we end up having the same experiences.

As you develop your connection with your Higher Self, you will begin to notice the synchronicities and the messages appearing in your life. These happen in a myriad of ways like dream states, conversations, messages, meditations, songs, music. They flow from multiple directions confirming an idea or an experience. Sometimes you have a thought and someone speaks about it a few hours later or the next day.

Applications of the Infinity symbol as a balancing mechanism, attaining equilibrium through balancing the heart and the mind, the masculine and feminine energies and creating balance between physical and non-physical reality. As you harmonise and attain equilibrium in your internal reality, you begin to reflect this frequency into physical reality becoming more aware and present.

From time to time, it is highly recommended to devote your whole meditation to listening. Just to listen. This process develops the throat chakra, the chakra of expression. Set the intention to hear the voice of your Inner Calling, your Inner Wisdom, the Higher Self, your connection to God/Goddess. You don’t have to be specific, you can also listen to your Guides.

At first you will probably not hear anything, too much thoughts, too much noise, but with time the noise will disappear and your inner hearing will open. With perseverance you will hear the inner voice, it is faint and subtle, also called the voice of silence.

Observe and record your experiences.